12 Best Places to Visit in Europe Once in a lifetime 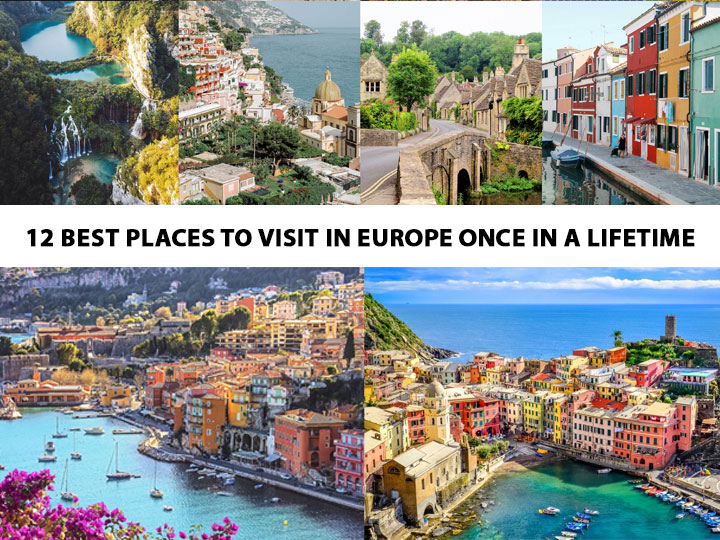 Europe has the world’s best places to visit and is an extraordinary place to visit with its breathtaking cities, mountains, and beaches. There’s so much to see and do that sometimes you feel overwhelmed with all of the choices. Vacations have never been easier. Now that EU countries are allowing travelers in — even if they aren’t fully vaccinated — the world is yours. From Iceland to Italy, France to Spain, what will your summer look like?

Don’t worry. We’ve narrowed down the list for you.

Berlin is one of the most iconic cities in all of Europe. From its vibrant neighborhoods to its rich cultural heritage and chic neighborhoods, Berlin has it all. On a sunny summer’s day, it is not uncommon to leave work and immediately go to the beach. Berliners (the locals) love going out, so they frequent the local bars and clubs all the time! To discover this remarkable city and find out for yourself what makes it so special, you should visit Berlin today!

2. Why Go To Amalfi Coast

The Amalfi coast attracts more than 3 million tourists annually with its breathtaking views, medieval charms, delectable cuisines, stunning beaches⛱️ and best places to visit in all Europe. It is therefore not surprising that it has truly earned its name “The King of Mediterranean.”

Forget about cold weather and explore the romantic and luxurious destination of Amalfi Coast in Italy. It is a place famous for its picturesque views, and romantic places and is home to many luxurious hotels. It has emerged as the hottest spot for honeymooners from across the world along with Santorini and other popular destinations in Europe.

You’ve seen the photos, you’ve heard the stories, now it’s time to live like a Florentine by visiting this city on your next vacation. Create memories that will last a lifetime while seeing Europe’s most famous statue, The David. It’s the perfect mix of art, food, and culture so make Florence your next vacation stop.

There is no better place to visit than Madrid. This city offers something for everyone, whether you want to soak up the culture, taste some delicious food, explore world-class museums…

From major tourist attractions such as the Museo del Prado and the Palacio Real to special places off the beaten path, like El Rastro flea market. Whether you’re looking for some tapas or a Michelin star restaurant, Madrid has your palate covered. No trip to Madrid is complete without trying authentic Spanish food. And while you’re at it, there are plenty of innovative restaurants to sample master chefs’ creativity.

5. Milan – The Fashion Hub of the World

Conventionally, Milan has been considered the “little sister” to more celebrated Italian cities like Rome, Venice, and Florence, but now with its newly improved infrastructure and increasingly dynamic cultural and business scene, Milan is quickly ascending the ranks.

Milan is becoming a cultural capital for design, internationally receiving recognition for its fresh creative scene. Milan hosts several international design awards and has gained status as the top global fashion capital, being ranked among the best in the world of Fashion.

Paris is one of the most intriguing and romantic destinations in the world — so it should be no surprise that it is one of the most visited. Never has it been easier to visit the world-famous French city, set against a backdrop of gorgeous and historic architecture. The city’s rich history is present around every corner, making Paris an authentic and unforgettable location.

Santorini may be very popular, but it’s well worth visiting for anyone who has ever wanted to experience a town on the edge of paradise. From the moment you step off the ferry and are greeted by glowing blue waters and towering cliffs, you may begin to wonder why it isn’t more famous.

What makes Prague special is its charm… Prague takes you back to the middle ages, it even feels like you were there. The buildings are all beautiful, and many of them have great cultural importance. Prague should be on everyone’s travel bucket list because the city has a lot to offer, ranging from beautiful architecture to delicious Czech food and unforgettable nightlife. So what are you waiting for? Come visit Prague!

London has the best places to visit in the world and is probably the most influential city in the world. It has so much art and architecture that since 2000 it has been officially recognized as a UNESCO World Heritage site, boasting 2,000 years of history and packed with events, galleries, museums and sporting venues.

It is hard to think of a city that rivals London for free art and exhibits. The British Museum, the V&A, Tate Modern, the Natural History Museum, the National Portrait Gallery, and many more do not cost a penny to visit. London also has art fairs such as Frieze London, as well as small, independent art spaces, which make it an ideal city for lovers of art.

Dublin’s tech boom has attracted many new restaurants, hotels and pubs, making the city’s already charming neighborhoods even more appealing. Whether you like your city breaks with a modern sheen or with an other-era luster, Dublin has something for you.

Dublin’s history is long and storied, with Viking roots dating back to the 9th century. But the city’s Viking legacy has been largely washed away; today, Dublin is a living museum of its history since then, with medieval castles and cathedrals on display alongside the architectural splendors of its 18th-century heyday—a period when Dublin was one of the most handsome Georgian cities in the British Empire and an embodiment of the aspirations of its most privileged citizens.

How power was wrested from their hands is another story, and you’ll learn that one in its museums and on its walking tours.

Amsterdam is the perfect summer destination and has the best places to visit in 2022. There’s an endless choice of things to do in Amsterdam during the warmer months. Come wind, rain, snow or shine, there’s always something to do and see. And never is Amsterdam more alive than in the summer, when the city’s streets, canals and parks transform into a buzzing kaleidoscope of activity.

Whether you want to party all day long at a festival, lounge on the beach, explore the canals by boat or barbecue in the park, there’s an endless choice of things to do in Amsterdam during the warmer months.

Mykonos is an island of sizzling heat and allure, with the Aegean Sea as a backdrop. It’s part of the Cyclades archipelago, which includes other hot spots such as Santorini and Naxos. But Mykonos is worth visiting for its own reasons; it’s not just another party island like Ibiza or St. Tropez. Thousands of tourists fall in love with this island each year for its beauty and culture.

Beach clubs are plentiful on the south coast of Mykonos, and taverns abound. But if you want to be around other people enjoying their vacations, you won’t find a more sociable place than Mykonos.

Also Read: The Best Holiday Destinations to Visit in Europe for 2022

3 shares
Bucket-List Mexico: Top Tourist Destinations to Visit in 2022
15 Biggest Travel Mistakes And How to Avoid Them