10 Best Must-Visit Historic Cities in the US 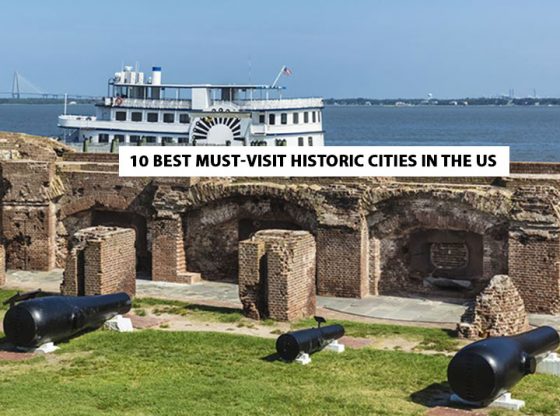 The United States is comparatively a very young country with young and historic cities. These historic cities in the US might seem advanced and young but have a remarkable history attached to them. The roots of these cities trace back to an old world that has been transformed into a new world of its own. Before planning your trip itinerary, look into the top best travel destinations to plan a perfect getaway.

If you are interested in architecture, love to try new food, and are attracted to artsy cafes and restaurants, the US is the best choice for you. With captivating historic moments adjoined to each city, we have compiled a list of the most adventurous and best top historic cities in the US that are a must-visit:

Starting up with New Orleans, it might not be wrong to say that it is one of the historic cities in the US that is the richest in history and historic events.  This city is unique and because of its vibrant culture, it is enjoyed by tourists to the fullest. The fascinating architecture, cemeteries, and the incredible cobblestone streets take everyone on a time-lapse into ancient history.

This city was first established as a French colony in 1723 and then was taken over by Spain in 1763, which makes the culture a mix between Spain and French. Another amazing aspect of its history is the tales of pirates. Yes, you heard that right, it has been said that due to a large port, trading was quite popular, that’s when pirates came on the land of New Orleans for trade.

It is advised to tourists that when they travel to this popular historic destination, they should visit the Laffite’s Blacksmith Shop Bar, one of the oldest bars in the US. Tourist can also visit the best tourist’s attractions such as eateries like French-Creole cuisine which has been there for around two centuries. It is also a city of Festivals like the famous Mardi Gras- a place to showcase the vibrant and lively culture of America.

This city was founded in 1682 by William Penn and is undoubtedly one of the pioneer cities among the most historic cities in the US. Philadelphia is also known as the “Birthplace of America” as the Declaration of Independence was signed here.

Tourists can easily spend their whole day visiting incredible historical landmarks like independence hall and The Liberty Hall. It has been said that this city is a root of Brotherly Love and offers so much more than historical buildings.

When you’re in this Old City, you can visit landmarks like Christ Church Burial Grounds, where the signers of the Declaration of Independence are interred. Across town, there also lies the amazing Philadelphia Museum of Art, the Rodin Museum, the Barnes Museum, and the Magic Gardens. A visit to Great America would be incomplete if you don’t visit the amazing land of Philly.

Santa Fe is one of the most historic cities in the US. It is also considered to be the first of many historic moments if United Stated. It’s noteworthy that Santa Fe is the country’s oldest state capital. It is also the home to the nation’s first public building the magnificent Palace of Governors and one of the top historic destinations in the US.

This vibrant city full of history has been remarkable to preserve the amazing treasures of the city along with the renovation of the downtown area to preserve its unique architectural pieces.  This amazing city is also the home of the oldest chapel in the US- the San Miguel Chapel (1610).

With an amalgamation of Spanish and Native American history, this city is also loaded with unique landscapes, culture, and the Museum of Indian Arts and Cultures, which makes it a lovely place for everyone to learn about the art of indigenous inhabitants. This also makes Santa Fe one of the most fascinating historic travel destinations.

It must be quite surprising for you to see America’s capital on this list, well, it is to be noted that no historical trip to America is completed without visiting the capital of the States. The city represents freedom, liberty, and freedom of thought.

The Grand White House, the US Capitol, The Smithsonian Museum, and the National Gallery of Art Washington are well known for art and culture making them a must-visit historical place when in States.

There is just so much more to see in the US capital such as the John F. Kennedy Center of Performing Arts and the Lincoln Memorial which are a representation of the colonial era and the country’s past. Hence, the collection of the world-famous monuments, landmarks, Museums, and historic attractions is worth visiting for tourists.

You’ll feel like you’ve been taken back in time whenever you visit Charleston, which is known for its elegance and hospitality. In 1670, it was established as an English colony. If you have an interest in history, a trip to the Holy City is a must.

The Battery, antebellum mansions, and countless historic churches and galleries are just a few of the city’s historic structures. Fort Sumter National Monument is the location to go to learn about the Civil War’s beginnings.

This city is famous for its slow yet happening life, atmosphere, and food that occupies a very pivotal place in the city’s culture. Seafood is the star food of the city, especially the oysters, shrimp, and grits. This Southern city is also comprised of The Cooper River Bridge which is considered to be an architectural wonder and is one of the most photographed spots in the city.

Elegant Savannah, formerly home to the Georgian elite, is now a wonderfully well-preserved metropolis including over a thousand antique buildings, gorgeous cobblestone avenues, and charming town squares. Savannah’s Historic Building, one of the country’s largest National Historic Landmark districts and an early example of imperial planning with its grid streetscape, encapsulates all of this.

The beautiful and colorful St. John the Baptist Cathedral, as well as other living art residences such as the Owens Thomas House, Oscar Thorne House, and Andrew Low House, are notable landmarks and tourist spots in the city.

Savannah also has some of the best southern cuisines. Savannah has it all, whether that’s art, culture, or heritage, so it will keep you entertained for hours. With stylish boutiques and eateries, it’s also a shopper’s delight.

Williamsburg is a great place to learn about America’s history. Start with a stroll around Jamestown, the birthplace of the British colonies. Colonial Williamsburg is one of the nation’s biggest living history museums, with archaeological relics on display as well as a vast outdoor theatre stage. Hundreds of renovated structures, live re-enactments, and countless actors dressed in historical costumes provide visitors with a realistic recreation of American colonial life. It is a great place to see history come alive and relive those scenes.

There are also lots of bars and coffee shops where you may enjoy typical eighteenth-century foods, as well as historic boutiques, craft, culinary, and agricultural displays. The town of Williamsburg, in addition to the theatrical re-enactment, is worth visiting.

Boston is also known as the cradle of Modern America. The famous Freedom Trail is a spread of 16 most amazing sites across the city. If any tourist wants to have a ride down the history lane they should visit the most historic cities in the US and famous attractions of the city including the Old State House, the Paul Revere House, and the USS Constitution.

Weave your way through the city’s evocative cobblestone streets, showing tribute to one spectacular monument after the other, and marveling at the downtown area’s stunning mix of old and contemporary architecture. You’ll travel via the North End district, a tiny bit of Italy with traditional cafes that provide the perfect occasion to refuel with coffee and pastries, along the route.

San Antonio became the first civil settlement in 1731 after the Spanish mission in 1718. It is famously known as the home to the Alamo. Visiting San Antonio is a must when you are here in Texas because of its historical background. After the American settlers rose against the Mexican army, they were defeated but this area of Texas was annexed by the US.

One of the most popular attractions in San Antonio is the River Walk, which is a walkway generated from the water of the San Antonio River. This walkway consists of many shops, restaurants, and also bars. These eateries are very rich in culture and each one represents a different story. Other historic sites such as the Spanish Governor’s Palace and the San Antonio Missions National Park are some well-preserved places from history. Hence you should visit this top travel destination when in the US.

10. Chicago, Illinois – Most Historic Cities in the US

Chicago is one of the most-visited travel destinations in the US. The city’s popularity grew swiftly a has marvelous waterways situated in several spots. This city is also considered a central hub for trade and transport of goods. Chicago was termed the world’s largest grain port in the 1850s due to the growing commerce market.

Interestingly, Chicago was notorious for its top gangsters Al Capone and John Dillinger who also dominated the press headlines in 1930. With this being said, the Biograph Theatre became very famous after the gangster John was shot down there. More historic buildings like the public library, and World’s Columbian Exposition. All these buildings portray a stunning and awe-spiring display of art and architecture. The cultural robustness and exhibits are also present in the famous museums of the city for you to see more.